2018 was a lackluster year for the California housing market. While remaining above the 400,000 benchmark, home sales fell 5.2 percent to 402,750, the state’s first decline in four years. Sales have been declining on a year-over-year basis for eight consecutive months since May 2018 and hit the lowest point in nearly four years with 372,260 units sold in December 2018.

Despite a steep decline in interest rates at the end of 2018, potential home buyers remained on the side-line as the uncertainty on housing and the volatility of the financial market continued to cast doubts on the future of the market. The murky outlook not only led to decrease in sales as buyers became more cautious with their buying decision, but also put a cap on price growth throughout the state. For the year 2018, the statewide median price reached $570,010 and increased 6 percent from 2017. Home price appreciation, however, remained near recent low at 1.5 percent at the end of 2018, the lowest increase observed since February 2012.

The inventory level continued to increase for the eighth consecutive month on a year-over-year basis with the state’s Unsold Inventory Index (UII) reaching 3.5 months in December. The double-digits decline in sales and the more than 30 percent increase in active listings both contributed to the hike in UII. Active listings have been growing strong since April 2018 and have been increasing by double-digit for the last six months. The year-over-year surge of 30.6 percent in December was on par with the growth rate in November 2018, which was the highest gain since April 2014.

What should we expect for 2019? The outlook for the economy and the housing market is a mixed bag for the upcoming year. With interest rates expected to increase this year and home prices remain elevated, affordability will continue to hamper home sales in 2019. While the economy will stay solid this year, there is currently a high level of market uncertainty, especially from the standpoint of consumers. Wildcards such as the government shutdown, the trade conflict with China, and the stock market volatility are just a few to keep in mind.

The lack of clarity creates a mismatch in price expectation between buyers and sellers and could puta drag on home sales going forward. As such, existing home sales in California are expected to decrease 6.9 percent in 2019, as potential buyers will remain on the side line. The softening in housing demand will put downward pressure on home prices, leading to weaker price growth in the upcoming year. The statewide median price will dip slightly by 0.2 percent from 2018, reaching $568,800 in 2019. Supply should improve in the upcoming year, but housing affordability will likely get worse as interest rates climb further. 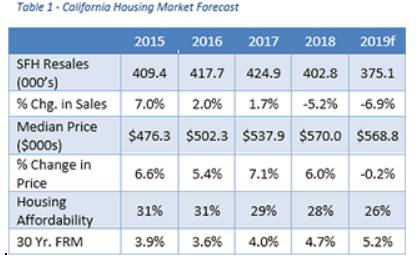