I really like to answer my client's real estate questions via blog posts.  I've found via analytics, you like to read them too.  Ask me your questions, and I'll research the real news.  Contact button is at the top of the page :) 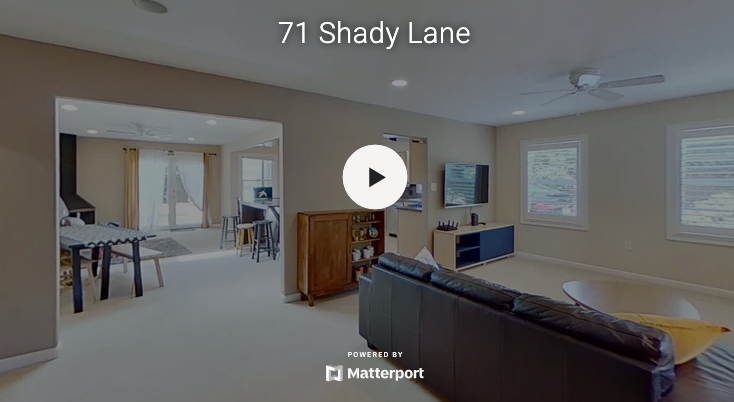 CURRENT STATUS INSIDE OF LINK

Posted in Listings
no comments yet

A Statement from CALIFORNIA ASSOCIATION OF REALTORS®

The Coronavirus outbreak has generated a significant amount of uncertainty in financial markets and for the global economy. The range of potential impacts varies wildly from forecaster to forecaster, but it has become clear that this is unlike anything the U.S. has faced in modern history.

Encouragingly, the federal government is beginning to take significant steps on fiscal and monetary policy to help offset the effects of the outbreak. Congress is poised to pass a $2 trillion stimulus package that includes direct payments to Americans, expanded unemployment/sick leave benefits, funding for hospitals, and many other provisions aimed at supporting business activity. In addition, the Federal Reserve is taking unprecedented steps to bolster the financial system including a virtually unlimited commitment to providing liquidity to several key markets including the MBS market, money market facilities, and corporate debt markets—something it has never done before.

Low rates should persist domestically after banks, servicers, and investors adapt to the initial shock to mortgage markets. Spreads are still running roughly 100 basis points higher than normal, limiting some of the short-run benefits, but will likely revert back to historical averages over the medium term. It is also important to note that this too shall pass. Economic activity in China, which is roughly two months ahead of the U.S. in its outbreak trajectory, is beginning to see economic activity rebound. Home sales have begun to pick up as well, providing some optimism for our potential recovery if we can get the U.S. outbreak under control in a similar timeframe. If China is a reasonable model, we can expect the economy to bounce back once we are past the outbreak, but some sectors will take longer than others to recover.

Still, the U.S. economy still has a long way to go before the economy begins to rebound again. Despite the myriad forecasts for the depth of the current slowdown in the economy, every forecast has one thing in common: the longer the outbreak, the worse the economic impacts will be. REALTORS® are already seeing buyers and sellers holding back in the market, new listings have started to fall in areas with shelter in place rules, the second quarter is expected to contract sharply during the second quarter, and new claims for unemployment had their single-largest weekly increase in history.

The U.S. is clearly not out of the woods yet, but it is encouraging to see actions being taken to mitigate some of the negative economic impacts associated with the outbreak. There are still many challenging weeks and months ahead of us but real estate is poised to do well during the recovery in a low-rate environment. And, the nascent recovery in China suggests that the recovery will begin over a period of months, not years, once the infections drop off.

In February, we had no idea the boredom that would set in.  Trapped here with our loved ones and roommates, one can only begin to wonder if now is the best time to purchase or sell a home?  When I was a kid, our family lived in a redwood forest.  It came complete with weeks on end of rain.  This brought flash floods that knocked out bridges and everything. 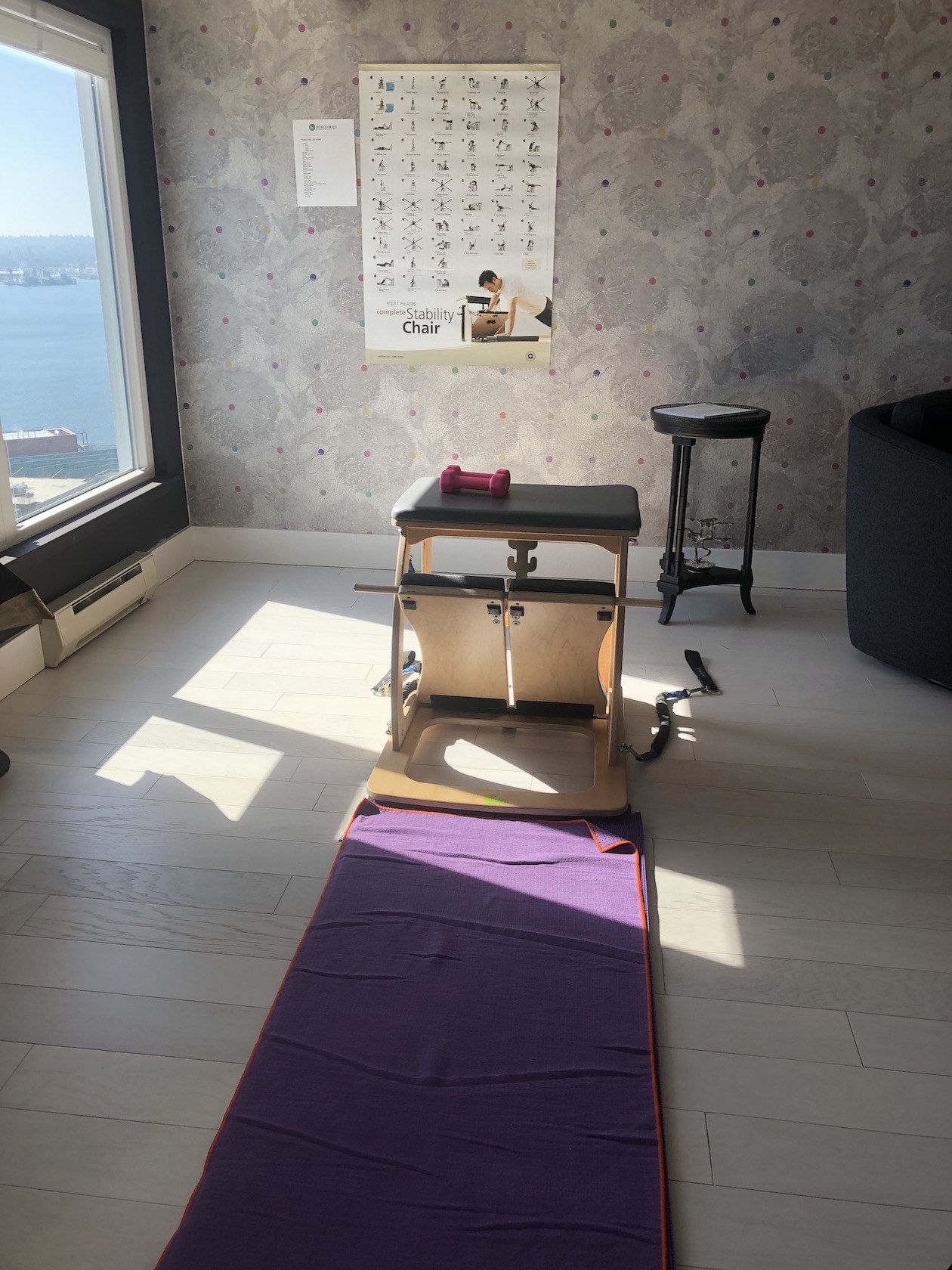 I remember how our family would stock up for this season (about 30-days of supplies), then we'd sit and watch the unstoppable rain.  I'd play solitaire puzzles, do my homework with my mom, create cardboard/sheet mansions with my dad, and invent games that damn near killed my sisters and I.  To this day, my most favorite thing to do was, get a book read.  I loved immersing myself into an utopia.  Between lines, I'd look up to see the lightning strike and listen to the defining sound of rain.

There was a kid that I heard, she thought God was trying to take her picture when the lightening would strike.  I thought about things like this...  The season has come, I have my 30-days of food, cleaned my home, played my puzzles, and now it's time to do my homework.  We're in lock down now, so things are a little more difficult in general - You know, like listing your home for sale or purchasing a home. 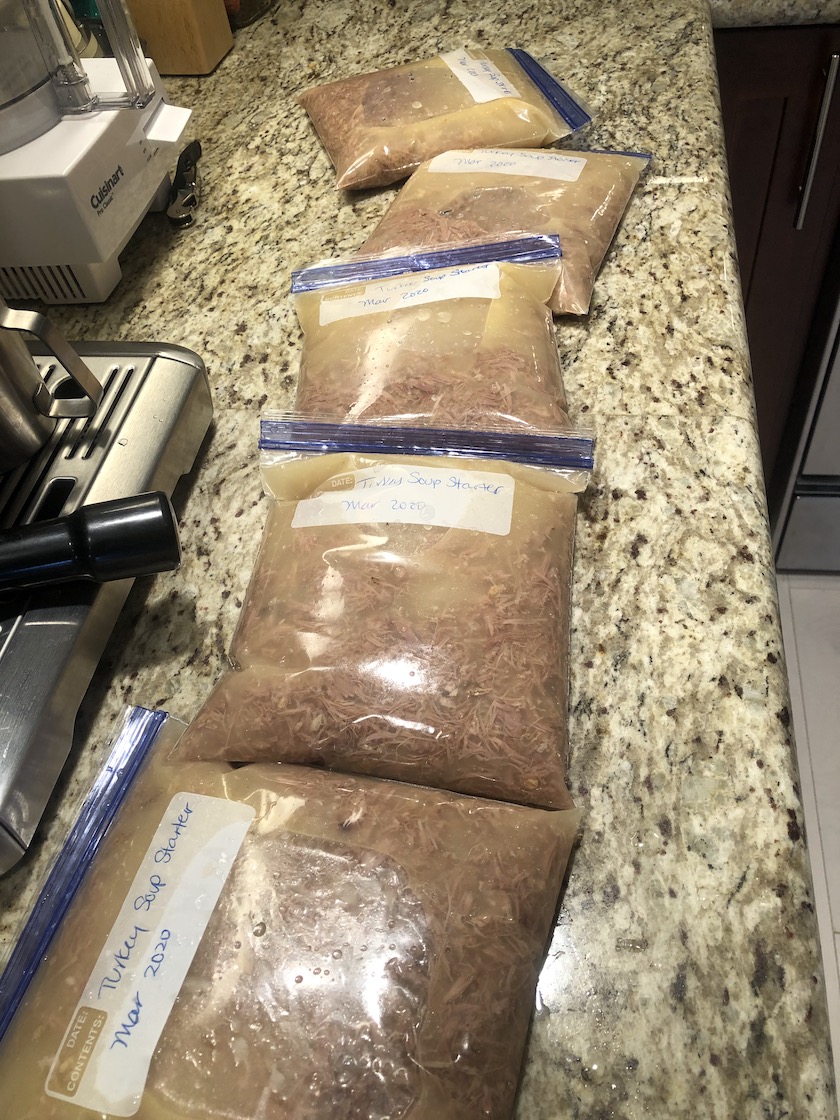 In February, we had ever low interest rates.  I mean lenders were calling me off of the hook to remind me to tell the entire world it's time to refinance. Showings to purchase a home were up 20.2% year-over-year.  This is sort of a big deal, when trying to predict how many purchases there will actually be.  I mean 2020 looked like it was off to an amazing start!

Then *wham* where here in this crazy storm, bored out of our minds, looking at all of our co-workers, at their unshowered worst in video office meetings (people take a shower, it'll make you feel better and whomever you're cohabitating with feel better too), bored our of our minds trying to figure out how to get exercise (see photo), Zoom chat for happy hour and cook for the big sick (see photo).

Stay in your home, stay safe, now here's what the market's was doing in February, in Contra Costa and Alameda Counties.  Yes, I have been attending a million Zoom chats with Economists, if you have questions about what they've been saying, let's talk.  Text me to schedule a time, so I can look presentable in the video chat, ha!  Here's where I video chat: https://www.elizabethrusso.com/blog/video-chat-elizabeth-russo/ 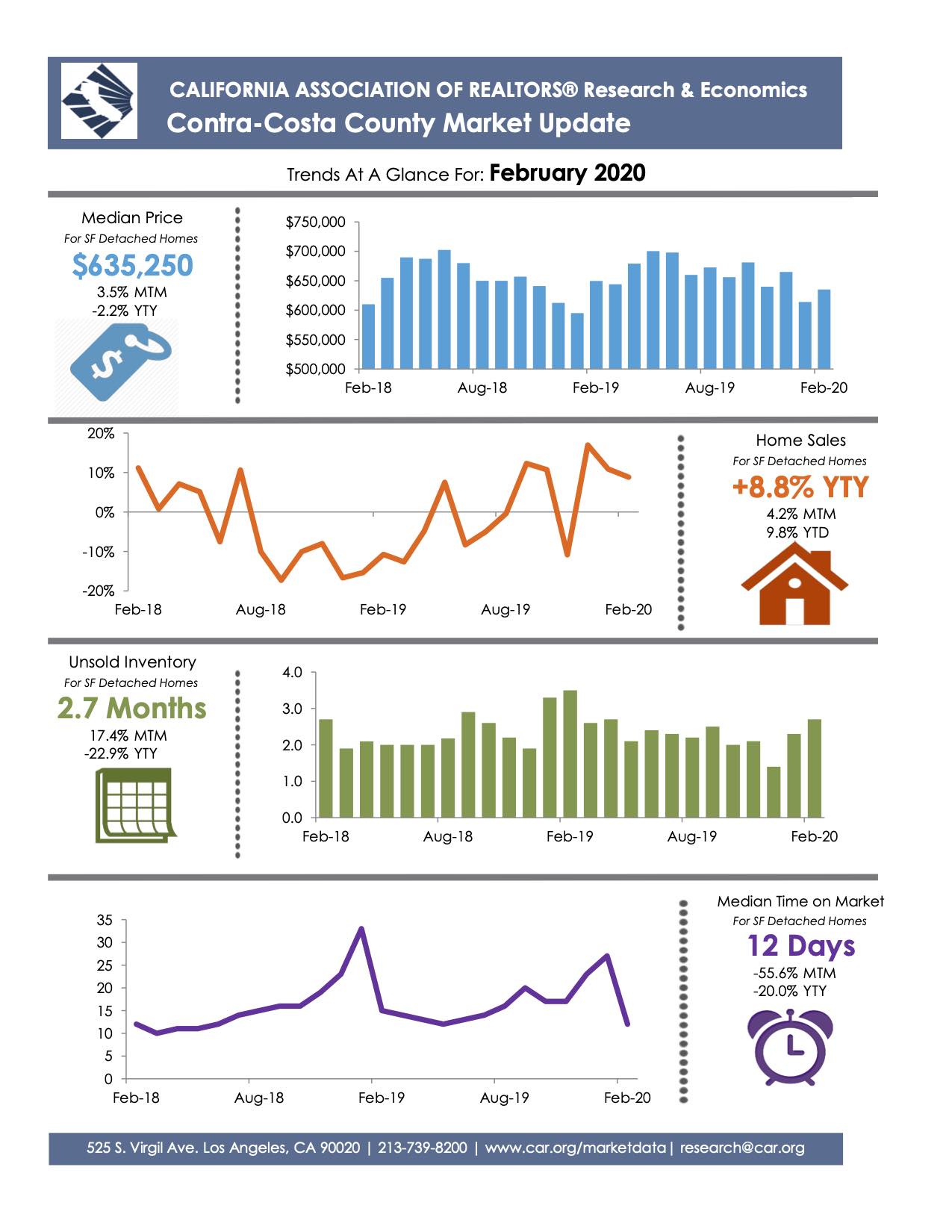 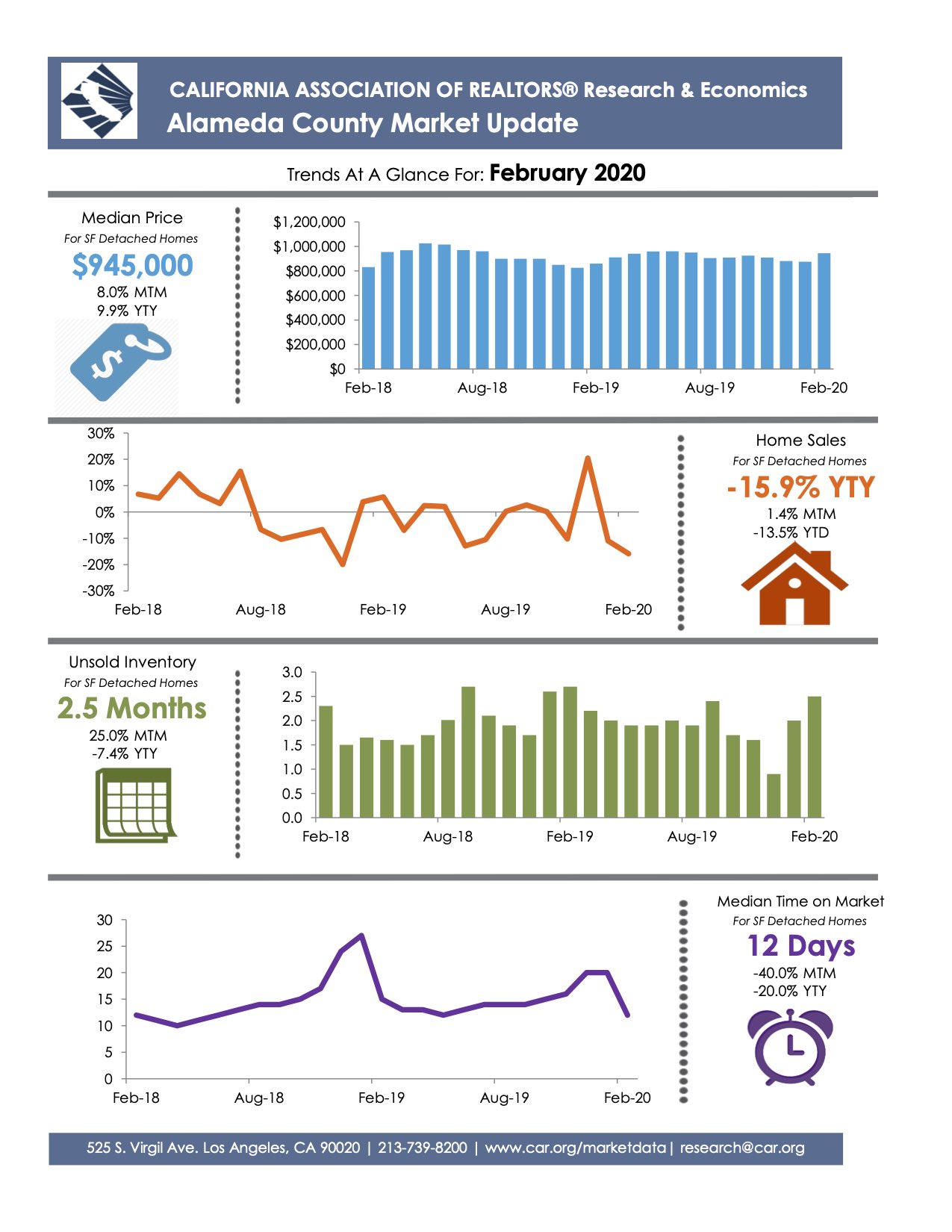 Posted in Recent Market Updates
no comments yet

While my dad has just declared that Shelter in Place means VACATION at home with my mom! My mom's a bit of a hermit, so she really thinks this is how it should be all of the time. It's good all around in the Hanford household, mainly because my sister and niece live next door, and my parents are catered to, hand and foot.

I want you to know. My husband is now working from home full time. So, I get a little accountability partner for my gym life, work life, friends life etc. I'm still working and trying to observe our 1 meter social distancing rule, sometimes even from him... I do however want you to know, I'm available for you in live video too. I'm on most platforms, just text me to find my user name :-). See you soon! 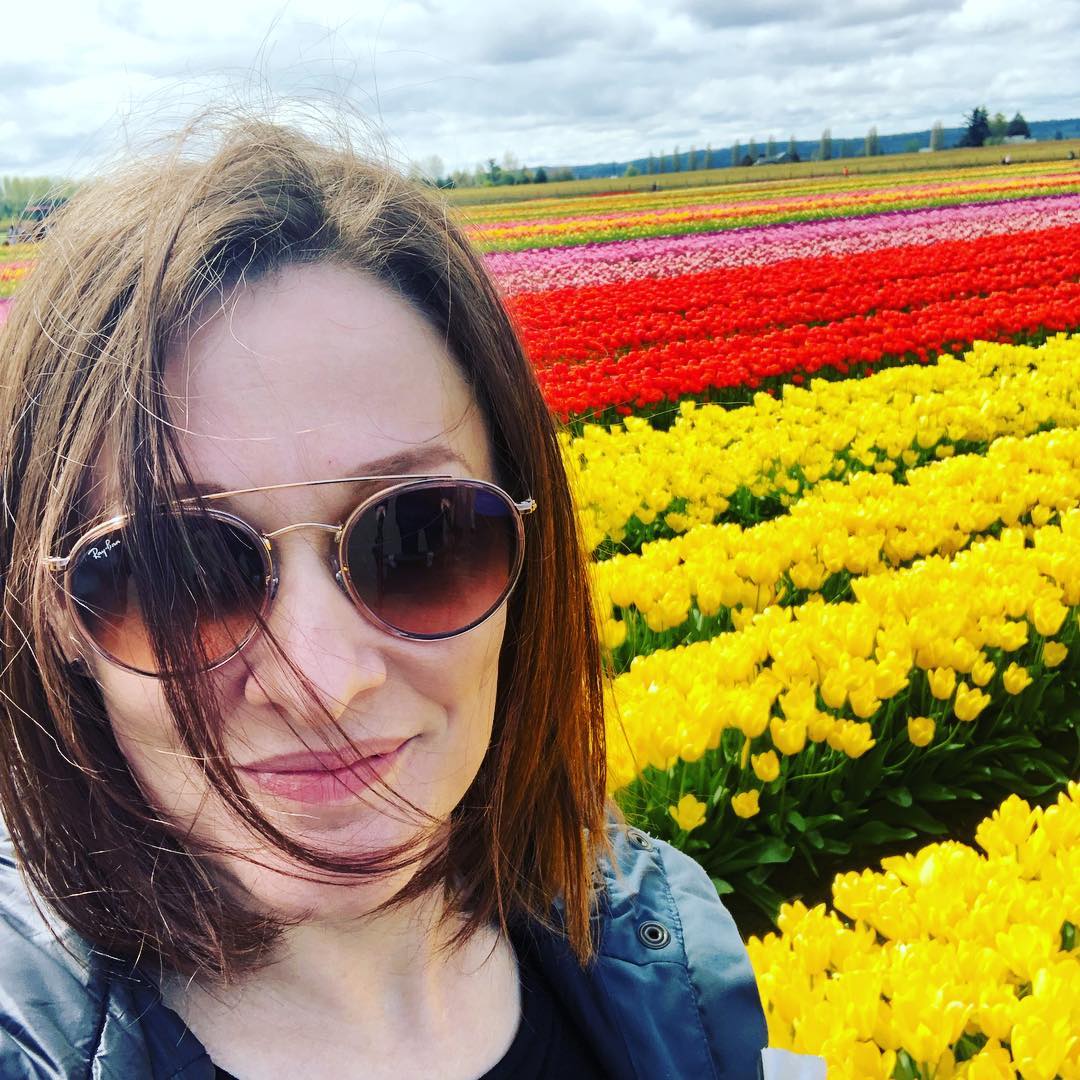 Some of my favorite apps are, Facetime, Google Hangouts, WhatsApp and Zoom

I thought you might be interested in how the Coronavirus might impact the California market.  Me being a Realtor, I'm a little worried.  Below is the statement from the California Association of Realtors.  Please reach out to me if you have any questions or would like to chat about the next steps in your plan?

View More
Posted in Tips and Tricks
no comments yet

These days I wonder, if you're not a contractor, how are you going to make money fixing up a home?  While the idea sounds awesome, a little hard work and a big payout, I just wonder if it might be a little unrealistic to think all fixers are going to have payouts.  Here's a wonderful graph to help with perspective. 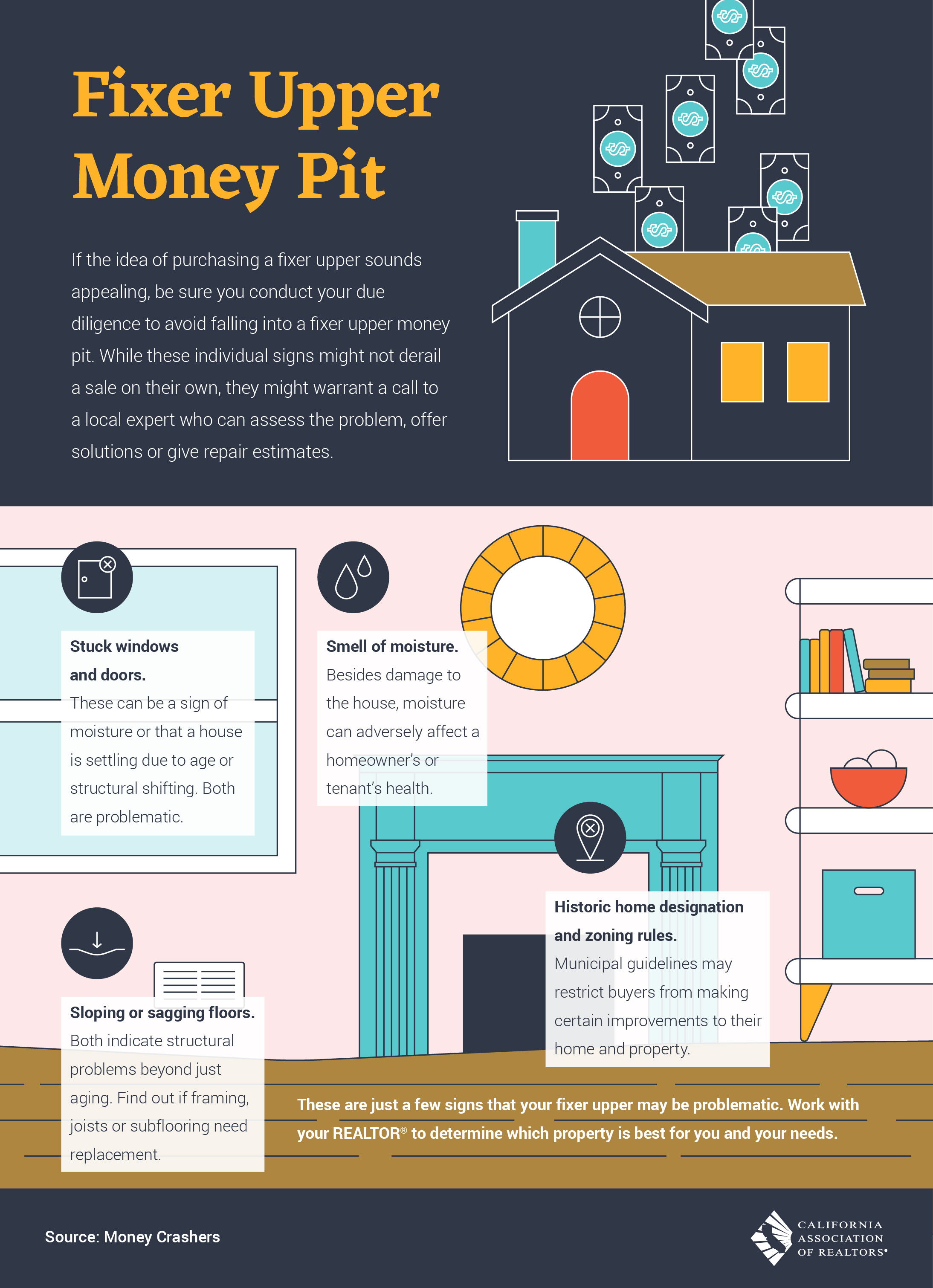 Remember, these are just the biggest money pits.  When you go out to look at homes with me, and you think you've found the right one for you, I will protect you and research a home to look for big ticket problems, before you buy the home.

Many wonder what the closing costs are for purchasing a home in Contra Costa County and Alameda County.

This is a really good question, being that they can be up to 2-5% of your purchase price.  It's good to think about these things so you don't get sticker shock a few days before you are to close escrow, and you're at risk of loosing your deposit.

Here's the run down:

Interesting stuff, yeah?  Be sure you contact us early in your home buying process?  We want to make sure you're ready for home ownership.  Don't forget, we're ready when you are!! 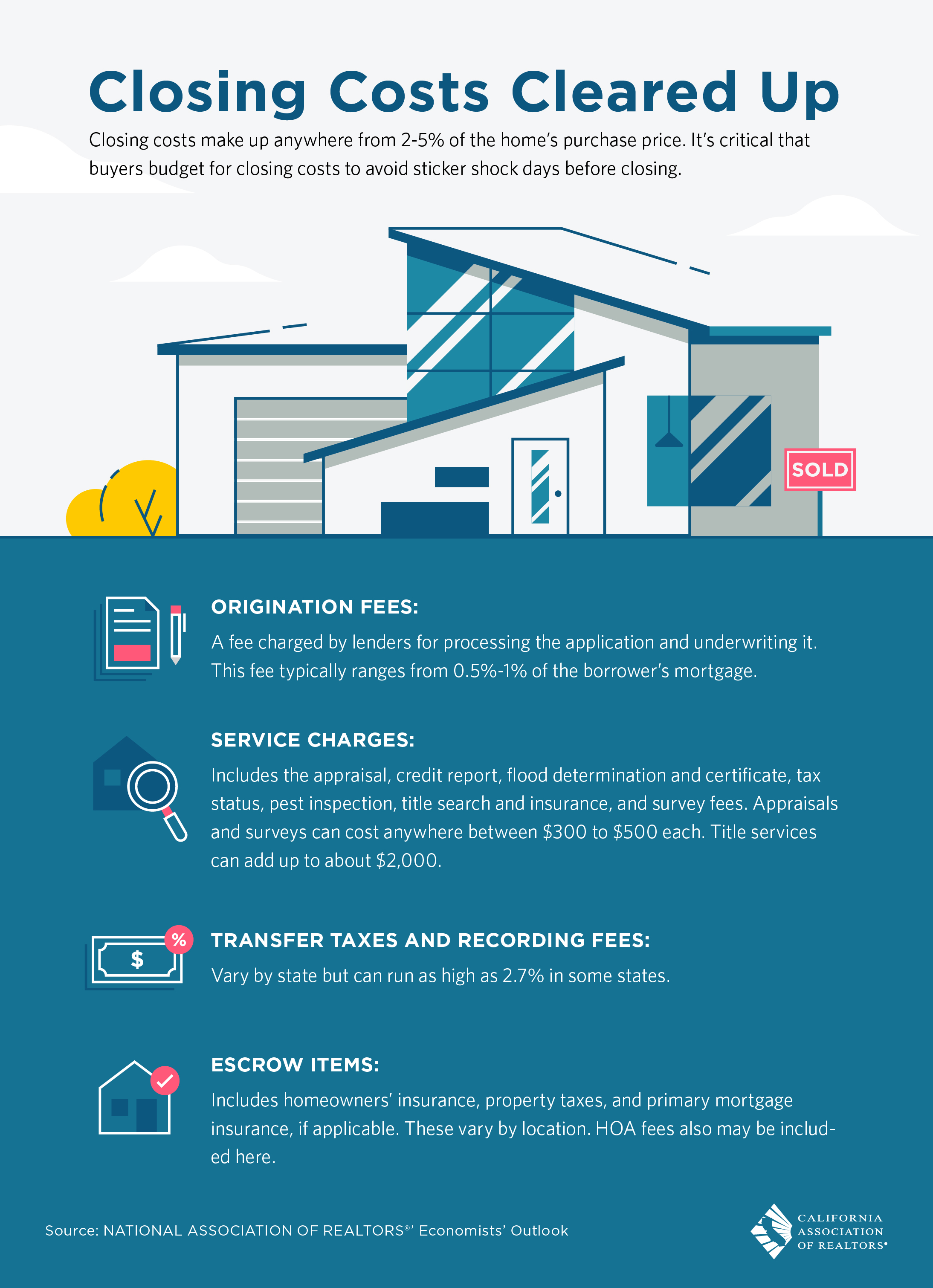 Well folks, we have entered into a Seller's Market, here's why:

Remember, reach out to one of us when you're ready to start thinking about making a move?  The earlier the better.  It takes time to plan a good transaction. 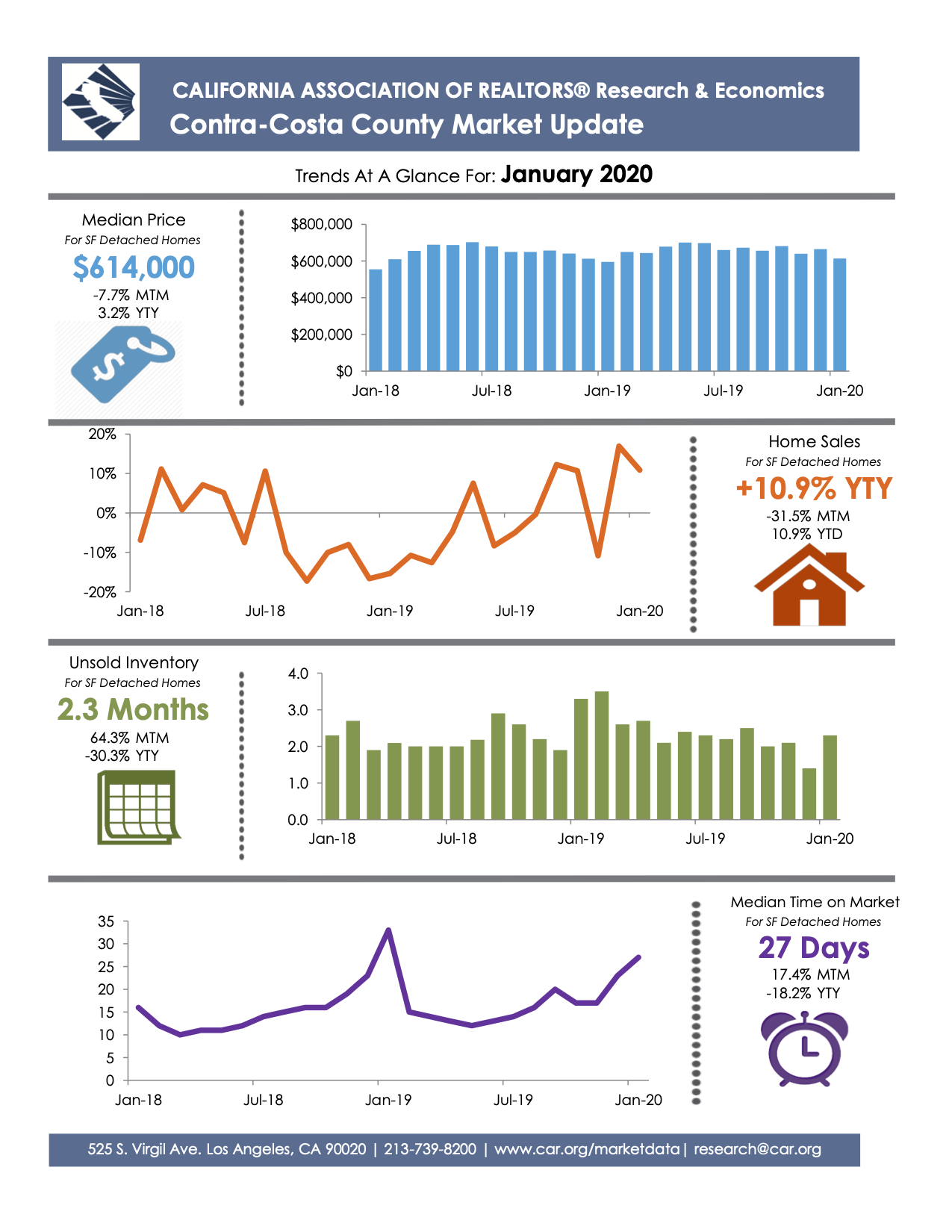 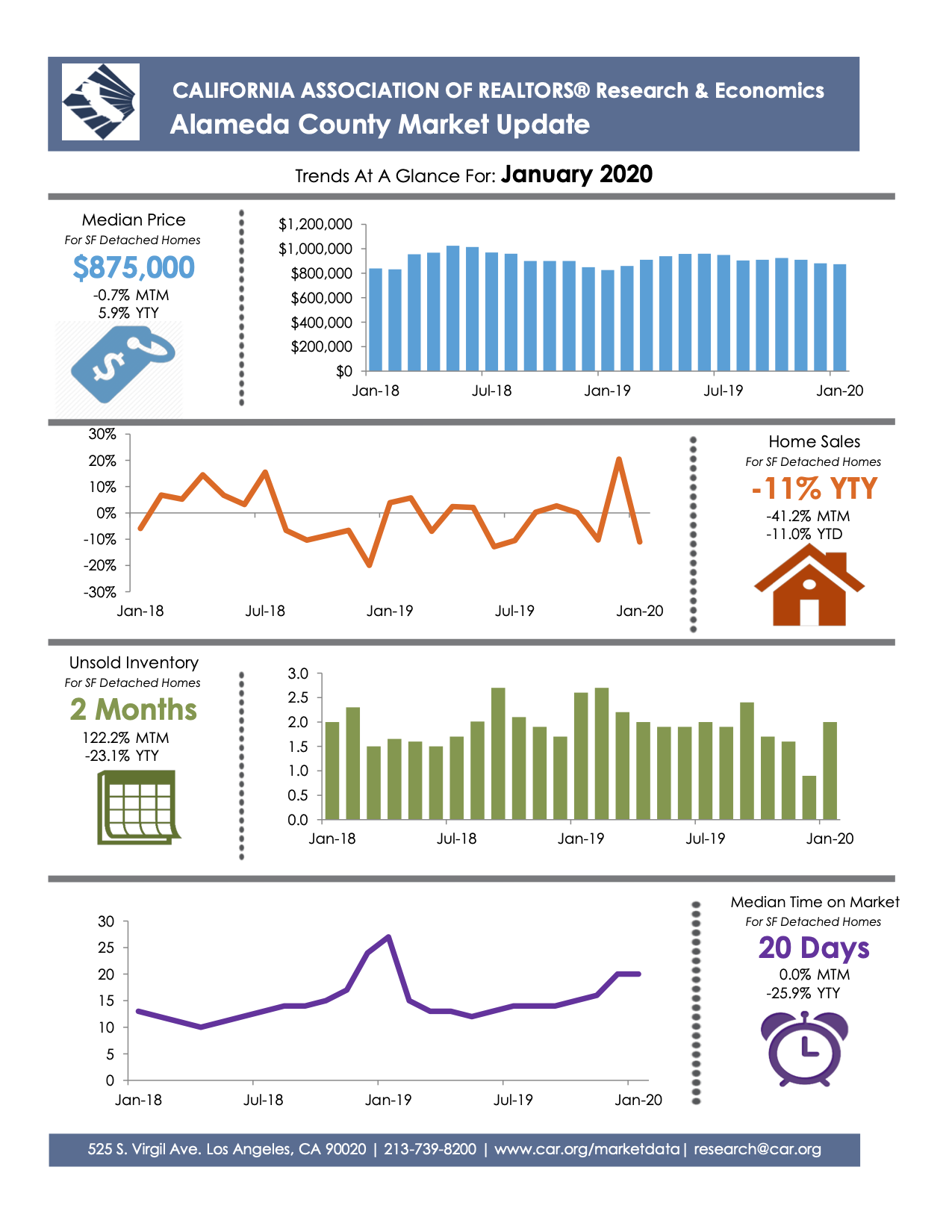 Posted in Recent Market Updates
no comments yet

Are You Saving Savvy? 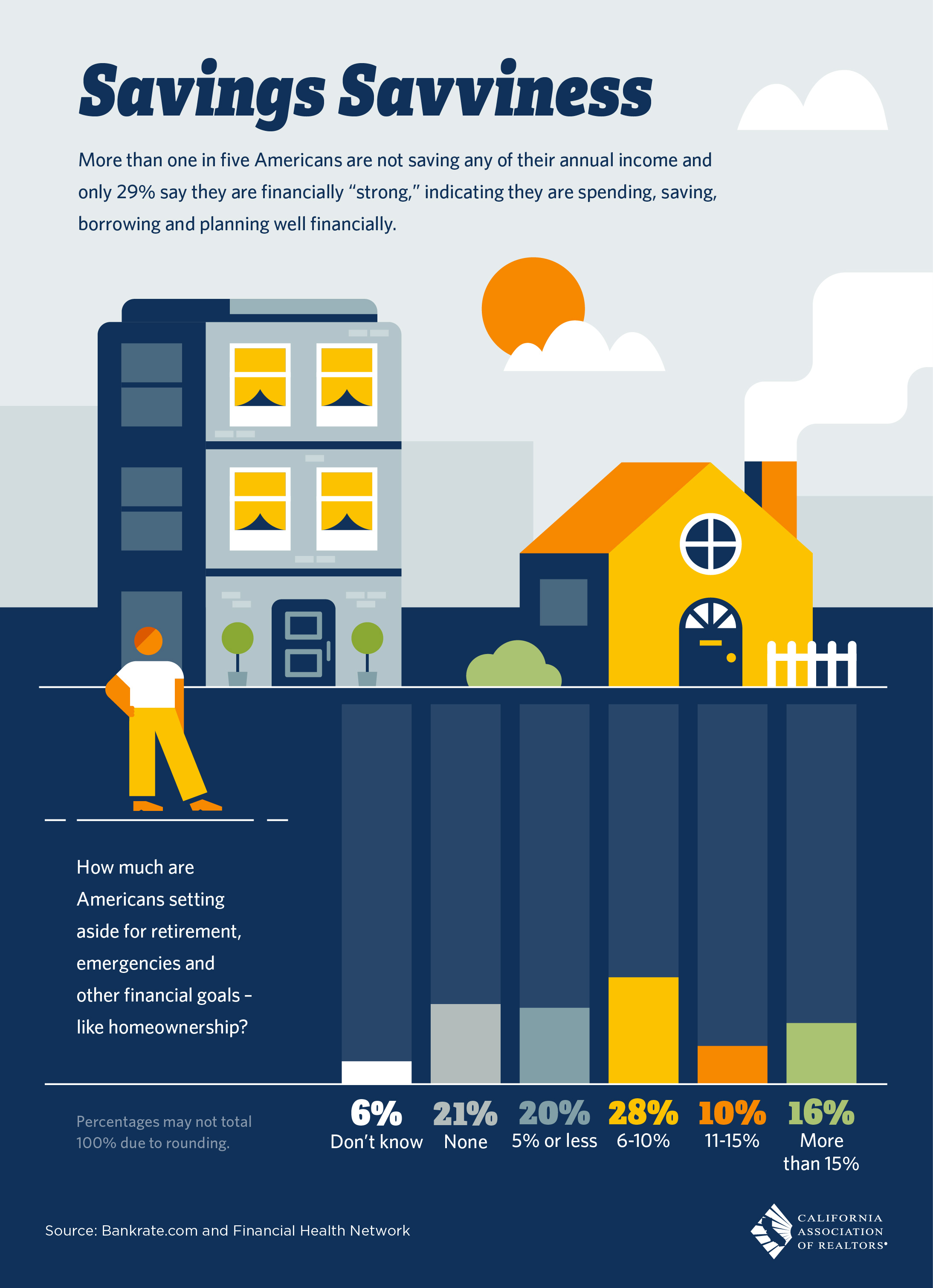 How much are American's setting aside for retirement, emergencies and other financial goals - like homeownership?

Bankrate.com and Financial Health Network said, more than 1 in 5 people in the United States are NOT saving ANY of their income.  And get this, 29% say they are financially "strong," indicating they are spending, saving, borrowing and planning well financially.

If you're thinking about entering into the real estate market, now is the time.  Those of you who like getting emails from us know, the way FICO hands out credit scores is changing.  They're going to penalize you for having personal loans, not paying your loans on time and having credit card debt too high.  Interest rates are currently the lowest we've seen in over a year.  Make contact with us now.  We're ready when you are! 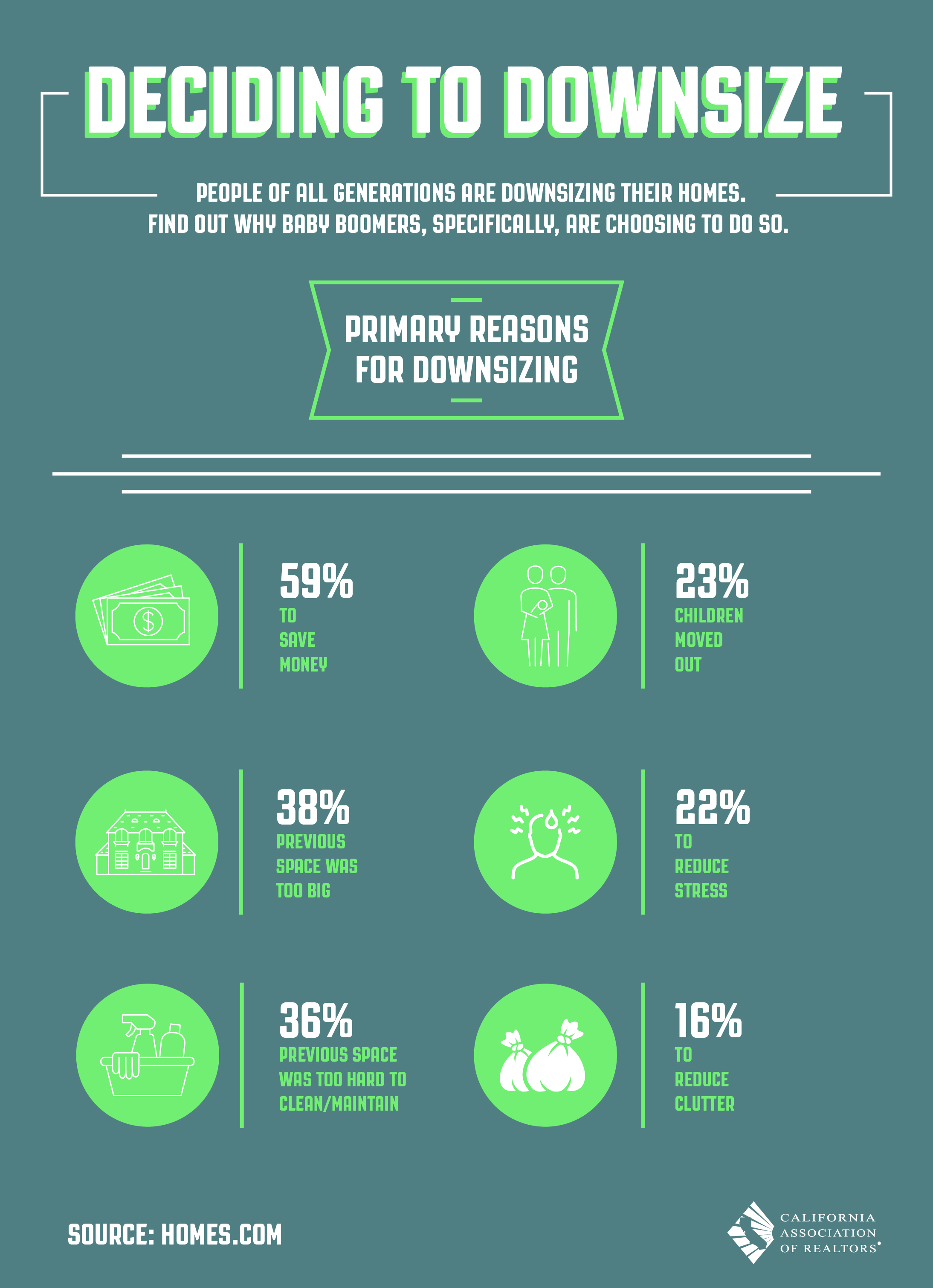 Turns out, loads of us are looking to downsize.  Here are the common reasons Homes.com believes people are making the change: